The Vera Roasting Co. is well known for its unique blends of resveratrol-infused coffee, and they are now expanding its range of specialty drinks to include a distinctive and beneficial energy boost.

Vera Roasting Co., unveiled an unprecedented launch of Nitro Cold Brew Coffee because it is the first nitro cold brew coffee on the market infused with resveratrol.

Resveratrol, which was first discovered in the 1940s, rose to fame in 1992 when studies indicated that red wine had heart-healthy properties.

Resveratrol has been shown in numerous studies over the past 20 years to reduce or prevent a wide range of diseases, including cancer and cardiovascular disease.

The beneficial antioxidant has become popular for its health benefits, which are found naturally in red wine and blueberries.

If you've purchased coffee in the past two years, even just once, you've certainly encountered advertisements for "nitro coffee" in grocery stores and coffee shops.

In the early 2010s, beer-obsessed homebrewers were fond of a method that is now one of coffee's largest and most pervasive trends.

Nitro coffee cans can be found on the shelves of almost every grocery store and gas station in the nation, as well as on the menu boards of small independent cafés and large national chains.

First introduced in coffee shops across the nation, nitro coffee is cold brew coffee that has been infused with nitrogen gas through a pressurized valve.

It was so well-liked that even Starbucks took a chance on the drink in 2016, offering it at its Seattle Reserve Roastery where, according to a Starbucks representative, it quickly overtook the Caffe Latte as the second most popular order.

Considering that making nitro coffee entails putting together a convoluted system of faucets, tubes, hoses, gas tanks, and keg connectors, the popularity is unexpected. It is also not cheap. Launching a nitro program may cost as much as $1,500, which is a significant expense for a small company like a coffee shop.

How did nitro cold brew (NCB) grow to be a must-have beverage then?

Before we get to why you love it, you should understand the science of nitro coffee in order to appreciate its allure.

The first step in the nitro process is to steep coffee for 12 to 24 hours in cold or room-temperature water.

The next step is to use a pressurized valve to infuse the cold brew, which is already a better beverage than iced coffee, with nitrogen gas, turning it into nitro cold brew.

This process creates the distinctive velvety texture of nitro coffee.

The coffee has a silky texture thanks to the minute nitrogen bubbles.

When beans are cold brewed, their sweetness is increased and their acidity is decreased, and when nitrogen is added, a frothy, milky layer forms that descend from top to bottom.

If you're still reading this, coffee nerds will refer to this gradation-in-motion as a "cascade" and compare it to a Guinness. A newly poured stout and a glass of nitro coffee may appear identical up close. Nitrogen is frequently stored in a keg, like stouts.

The outcome? A chilly, velvety, slightly sweet, and thick beverage that simply comprises coffee and no dairy or sugar. Many coffee enthusiasts are persuaded to pay $6 for a cup of coffee by this remarkable texture.

We're kicking this summer off with our own Nitro Cold Brew Coffee currently available at the New Hampshire State Liquor Stores. How a NH Professor Changed the World

The Only Coffee Infused with Resveratrol

2015 saw the start of the Vera Roasting tale at a routine annual physical.

Glen Miller, Ph.D., a professor of organic chemistry at the University of New Hampshire, discovered that his blood sugar levels had increased, much like those of millions of Americans.

Vera Roasting Co. is a pioneer in the coffee industry for premium, heart-healthy coffee.

82% of American adults drink coffee, and they spend an average of $21 per week on their favorite blends.

Unlike tea, coffee has not, until now, placed a priority on innovation in health and wellbeing.

Thus, began his journey. While in the shower one morning, it dawned on him...

The Vera Roasting Co. Is Well Renowned For Its Distinctive Blends Of Resveratrol Infused Coffee.

Let customers speak for us We are very pleased with the switch to Vera Coffee. Great flavor and love supporting local I would love to see more of the seasonal coffees in K-Cups maybe soon! Firm believer Love the coffee taste great and make me feel good. Love to support local cant wait to try other flavors... 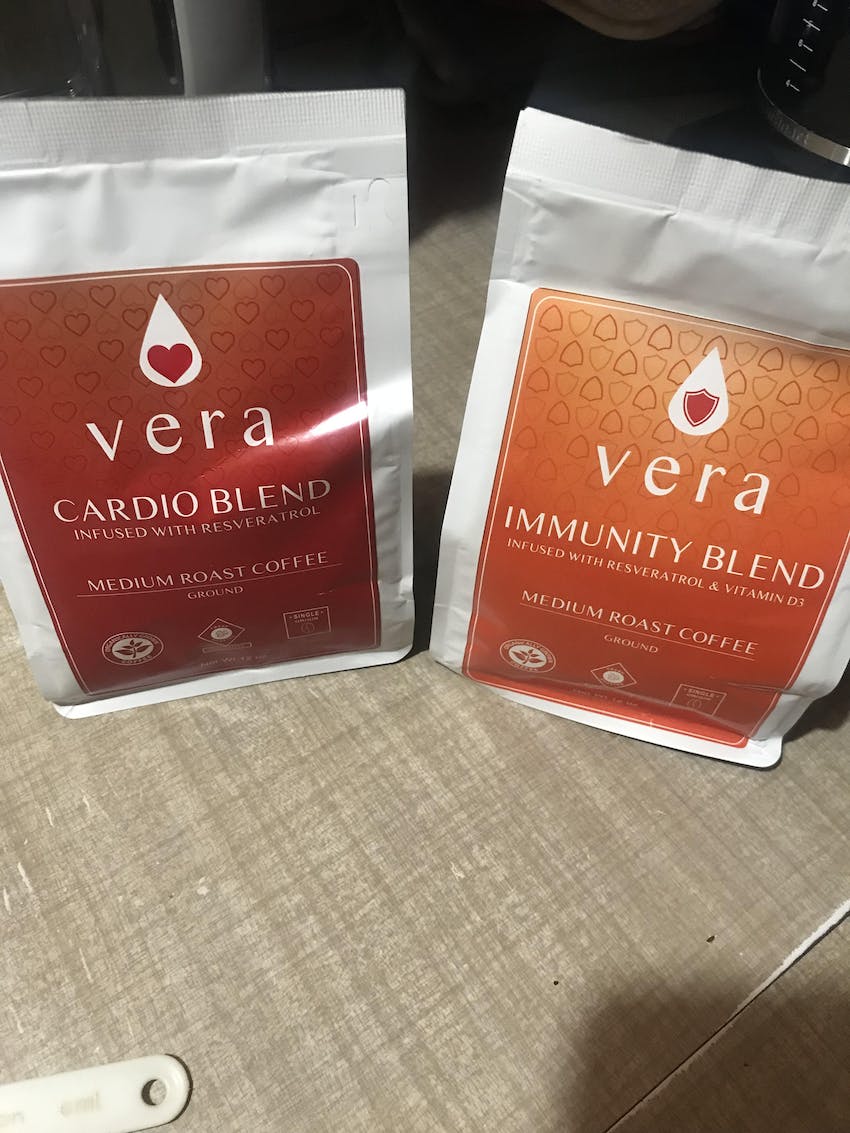 I purchased the cardio blend for my mom. (Immunity for myself) We both had a cup, it tastes great, smells great, plus with the added benefits for healthy blood flow and resveratrol, it’s a double plus! I shall order from Vera again! Accidentally finding this company is a true golden find! Highly recommended!

Much to enjoy. Great flavor. "This coffee tastes great and has the added benefit of several vitamins. We really enjoy it and feel less jittery/more focused compared to our usual brand. This will be a new staple for us! Look forward to trying more flavors as they expand their product line."​

10/10/2022
Jim P.
Vera Roasting Co.
It’s not what I noticed, but rather what I didn’t notice that made all the difference

I’ve been drinking VERA coffee for a little over a month now. I’m very healthy but do have some arthritis in my left knee. I often wear a brace on it for work or walks.
A few days ago, I realized that I wasn’t experiencing any pain or discomfort in my knee—even though I haven’t been wearing my brace!
I’m sold on the benefits of VERA coffee, and would encourage people to give it a try for a month to see if it helps—I’ll bet it does!

I have been purchasing the K- cups for a couple of years and absolutely love it! It is the only coffee I drink. I purchased the Cardio Blend for a friend as a birthday gift and she also loves it!!

Denise P.
Immunity Blend
Today I noticed I had no joint pain!

I recently switched my morning coffee with Immunity Blend.

Today I realized that something that previously bother me no longer did. Assisting my daughter and her children, which required me to spend the majority of the morning climbing and down steps. To my surprise, I noticed the usual discomfort of that monontoumous activity, I wasn't in pain, and neither was my hip or leg! I'm even considering cutting back my supplements.

I found it hard to imagine that just one cup of coffee could have such an impact! Thank you!

I have been drinking Vera's medium roast Cardio Blend every day for years. It is the smoothest, best tasting coffee I've ever had. If I try a cup of something else, I immediately notice the difference. It's just not the same if it's not Vera. My blood work has improved significantly since I began drinking Vera (cholesterol, triglycerides, thyroid function), and I feel great!

We have been Vera coffee drinkers since they began operations. The Immunity Blend is the second generation coffee to us. We love it, and believe there is no substitute. We always have a bag stashed away just in case the next order is delayed. Keep up the great work!

Mark A.
Calm Blend
The best coffee on the planet!!

I’ve tried virtually every other coffee brand in my search for the perfect “cup of Joe.” I have to say, this is the BEST & smoothest coffee ever!! Love the calming effect and the health benefits of the resveratrol! So much healthier than red wine! I feel as though I can think more clearly and feel a nice calming effect. Yet, not in a sleepy way like with red wine! After each cup of Vera I have a calm clarity and raring to tackle whatever comes my way. There’s also no caffeine crash that I have experienced with other coffee brands! I will definitely be making this my new go too coffee brand and have told all my family and friends about it!